It’s All Kicking Off: The Rise of Womens Football at Newman 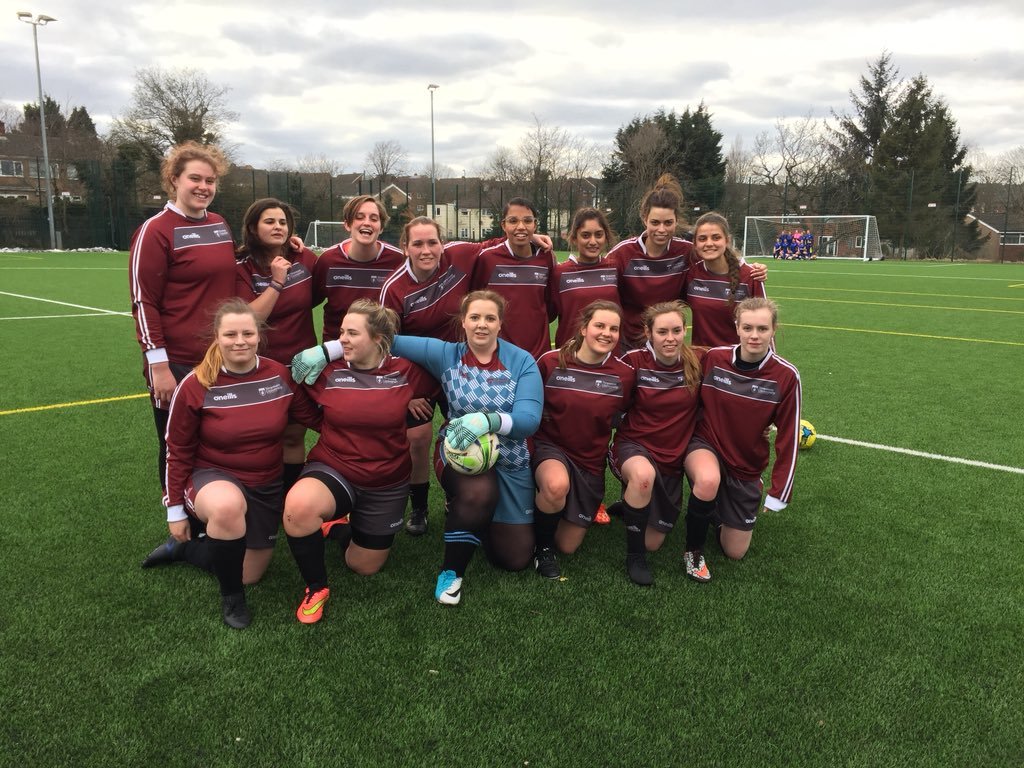 The England Women’s National team are ranked third in the world by FIFA and are currently battling their way through the knockout stages of the 2019 Women’s World Cup, being held in France. Women’s football has grown tremendously over the last ten years, with the development of the Women’s Super League in 2010 and the Women’s Championship in 2014. The popularity of womens football to the public is also showing rapid amounts of growth, with the number of viewers on televised WWC matches rising 79% based on the first two matches of the group stages alone, and a rise in viewers through online streaming services by a massive 310%.

Figures like this evidence the growing popularity of the women’s game and inspired me to help grow the game at Newman. The opportunity came about at the end of my first year to set up Newman’s first women’s football team in a number of years, which I captained throughout my second year. After copious amounts of advertising through social media, around the university and from the sports centre, we managed to acquire the minimum required to put forward a team to compete in the BUCS league for our first season. Getting through that first season was a struggle to say the least, as it is for many new teams, but the commitment, effort and teamwork shown by our members was outstanding and the driving force behind the progress made in our first season; from progressing forward from some difficult results at the beginning of the season to achieving a penalty shoot-out win in the first annual Varsity match versus Harper Adams University, which edged team Newman to an overall victory on the day!

I personally have been playing football for around twelve years now and am currently competing in tier four of the women’s football pyramid, so the competitive element of football is obviously important to me; however, the foundations of my love for the game were built at the park with my dad as a kid. Every day after school I’d run home to get changed into one of my many football kits, grab a ball and go straight to the park for hours, working to master free-kicks like Beckham, tackles like Terry and dribbling like Ronaldo. That was until a few years later when my eyes were opened to the world of women’s football; suddenly I wanted to shoot like Ellen White, dribble like Karen Carney and put tackles in like Casey Stoney. Women’s football opened my eyes to a whole new world of role models and blessed me with the realisation that GIRLS CAN PLAY! Being the only girl at my school involved with the sport, I was completely unaware that girls’ teams even existed, and that I could actually play for a team. So, I did. I found a local team and started training, and that’s how my journey began. Twelve years and seven teams later, plus the addition of secondary school, college and of course the university team here at Newman, and here I am.

Football at Newman was, at times, the driving force getting me through my degree. There were times that I questioned not only my ability to complete my undergraduate study, but my desire to do so as well. Football had always been somewhat of an escape for me growing up, whenever I needed space away from everyday stresses or time to put my emotions into perspective. I believe it was this, along with the support of the amazing teammates and friends I had through the team, that enabled me to continue to progress through the remainder of my degree. Holding the captain’s position also played a huge part in my personal development, with my self-confidence growing massively over the last two years as well as bettering my organisational and time management skills through the process of coordinating the women’s team. Being part of this team helped me to flourish into the person I am today, enabling me to complete my degree, continue playing football and continue progressing along my career pathway.

Football at Newman is inclusive for all; regardless of age, race, sexuality, gender or even ability. The diversity displayed through not just the women’s football team, but all sports teams at Newman, is representative of the university community and that in the surrounding areas. The teams at Newman are very participation driven, with a very inclusive ‘Sports for all’ ethos, meaning we encourage the participation of all students, regardless of age, experience or ability. This ethos has been supported by our team and allowed for the development of the family atmosphere we currently possess.

Having recently come to the end of my time at Newman, I hope that with the popularity of women’s football continuously on the up, the players from our football family remaining at the university and with the support of Dom and all others at the sports centre, we will be able to give women’s football at Newman a kick-start to continue the development of all women’s sport at Newman.