I have M.E/CFS, Fibromyalgia, Occipital Neuralgia, a cyst on my brain and a brain tumour. I have been chronically ill since the age of 14, in 2014 I caught and subsequently became ill with glandular fever. Glandular fever, also known as the kissing disease, mononucleosis, or ‘yuppie’ flu is a common virus experienced by teenagers. However, one of the less common impacts of the virus is a prolonged illness diagnosed as post-viral fatigue. Further to this, if the symptoms continue for over 6 months a diagnosis of Chronic Fatigue Syndrome/ Myalgic Encephalomyelitis may be made.

CFS/M.E is primarily characterised by ongoing and severe fatigue, which is best described as plugging your phone in to charge at night and waking up to find it was only on 30%. I lost 70% worth of energy, leaving me exhausted and unable to sleep and wake well rested. CFS/M.E has a long list of further symptoms that impact every aspect of the body. The symptoms I experience in addition to fatigue include brain fog, inability to concentrate, poor memory, flu-like symptoms, and muscle spasms.

Dealing with a chronic illness like CFS/M.E is difficult enough on it’s own, however at the time I was studying and subsequently took my GCSE exams. I also had to make a lot of the stressful but important decisions that would guide my career and education in the years to come. This all happened with limited support due to the vague and prolonged nature of receiving a diagnosis and treatment for my condition. Unfortunately, a trigger of exacerbation of symptoms for CFS/M.E is stress, when the condition is triggered it can worsen, leaving it’s victim housebound, bedbound or in long term residential care. However, personally although I experienced recessive periods in my illness, I was able to continue with my GCSE’s, albeit reduced to the core subjects.

By November 2017 I had completed my GCSE’s and had entered into sixth form, however the stress of A levels alongside working a part time job put my body into a recessive state. I began to experience pain in every part of my body, beginning in my limbs, progressing to my joints and then to wherever I could actually feel pain. This was diagnosed as Fibromyalgia. Fibromyalgia is a condition characterised by ongoing and widespread severe pain; this is caused by the nervous system of the body being oversensitive to stimuli.

At this point in my chronic illness journey, I had to face using a wheelchair to manage my symptoms. It was embarrassing, and incredibly difficult to admit that I wasn’t like my peers. I couldn’t attend parties or loud social events as the noise increased my pain. I struggled with bright lights and extreme temperatures, all of which left me working from home more often than not. I had to increase the time I took to do my A levels to three years instead of two to accommodate this, I was terrified as it seemed everything I had relied on and hoped for was becoming unattainable. However, despite these symptoms and experiences I completed my A levels, albeit reduced to two with great success of an A and A*.

During the three years I took to do my A levels I began to have headaches, nothing unusual considering the diagnoses I already had, however as with every new symptom I had to get checked out. I certainly wasn’t prepared for the diagnosis to come though. MRI scans showed a pea sized brain tumour, known as a glioma on my brain, I call her Penelopea. This tumour is very slow growing, with currently no change in it’s size to date. However, I have to face the fact that Penelopea will grown at some point in my life, and I will cross that bridge when I come to it! 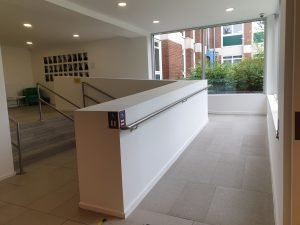 I began my first year at Newman in 2019, I use a mobility scooter now (cool right?!) to aid my ability to get around. Adjustable height tables are available in many of the teaching rooms, particularly in Hilda and Darwin at Newman. Lifts are located in various areas around the campus and accessible toilet facilities are available in several places too. All of these adaptations helped to make the transition to Newman a smooth and easy one for me as a disabled person. I settled in quickly and found Newman to be a welcoming and friendly environment for people with disabilities.

In my first year at Newman, I had a routine scan that showed a small colloid cyst on my brain in addition to the tumour. Again, the cyst was just there, doing nothing too concerning. Doctors advised that I’d need to be careful and get checked out if I ever hit my head, faint, or begin bleeding. This is because a colloid cyst can burst at any time, impacting the water baths on the brain, and causing swelling. The first aid team at Newman along with the inclusion support officer Heather Griffiths were made aware of this, therefore ensuring I am safe and would be cared for correctly if an accident ever were to happen.

It began to feel like I was collecting scary and ongoing illnesses like stickers on a loyalty card. True to form, I collected another ongoing chronic illness in November of 2020, during my second year at Newman. Sharp shooting pain in the back of my head was diagnosed as Occipital Neuralgia. The Occipital nerve in my brain was being squeezed causing sharp pain. This meant I became even more sensitive to light and sound, as well as having frequent headaches. However, through the support and advice of Heather I was guided and aided in managing my symptoms alongside my university workload – all while in a global pandemic! 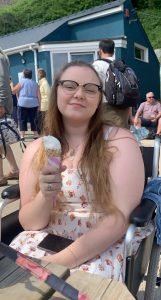 As you can imagine I take a great deal of medication, if I jump a faint rattling sound can be heard! One thing to note from this long winded story is that every single diagnosis is invisible. If I were to be seen on an average day, with no mobility aid, I look no different to any other 21 year old. Yet, I’m still experiencing the plethora of symptoms, I am still chronically ill. I refuse to let my health hold me back. It took a while for me to accept that I’d have to change my plans and ambitions, adapt them to the ‘new’ me. However, now I take each of my diagnoses as an aspect of my identity, without the experiences I’ve had with my health I doubt id be the person I am today. I have a passion for disability rights and raising awareness of chronic and debilitating illnesses.

I am incredibly lucky to attend a university with excellent support and understanding of disability and chronic illness. I am confident that I have been able to maintain my academic achievements because of the supportive nature Newman fosters. Newman University is the ideal, shining example of a disability friendly university.