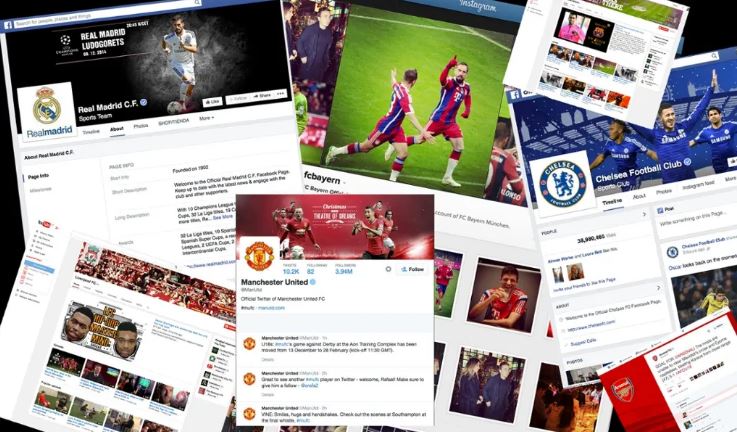 Read this article written by Dr Stefan Lawrence, Programme Leader for the BA (Hons) Sport Management and BA (Hons) Sport Development with Coaching degrees at Newman University, about the bigger issues facing football’s official club social media accounts that we all need to talk about.

After Leeds United’s 5-0 demolition of West Bromwich Albion at the Hawthorns, Amazon Prime pundit Karen Carney, entertained a really rather well documented criticism of Leeds under Marcelo Bielsa, if not in a slightly clumsy way. Carney postulated:

“They (Leeds) out-run everyone and credit to them. My only concern would be, ‘would they blow up at the end of the season?

“We saw that in the last couple of seasons and I actually think they got promoted because of Covid in terms of it gave them a bit of respite. I don’t know whether they would have gone up if they didn’t have that break.”

Was the comment fair given Leeds had gone on a 5-game unbeaten run up until the first lockdown halted the Championship, which eventually they won by a 10-point margin? Well, no, perhaps it wasn’t if you: (a) take what she said out of all of its context and ignore the part of the sentence, signified by the use of “in terms of”, which was clearly an attempt to caveat the “they got promoted because of Covid” part of the sentence with a little nuance; and/ or (b) if you’ve never been asked to speak on a live broadcast as an expert and you don’t understand how difficult it is to be articulate on the spot, in a pithy way, what you mean when speaking in front of millions of people.

Is there any reading of her comments that could understand it as a reasonable position? Well, yes, if you take it she rather clumsily intended to convey that a short break may have benefited a team famed for their work rate, especially considering the evidence of the season before and Bielsa’s history with past teams.

“It’s not a good look … to single out a female pundit and actively encourage fans and trolls alike to hound a person for doing their job.“

Evidently, everyone who has an opinion on Carney’s comments has the ability to use their powers of interpretation. “Covid”, after all, was not signed in the January transfer window to confidently spearhead Leeds to a promotion push, which is what a literal interpretation of the comments would imply. So why don’t those powers of interpretation extend beyond outrage and sacrilege for so many reacting on Twitter? Why so much abuse? Why the offence? And why no vilification of Jimmy Floyd Hasselbaink for agreeing with her?

It’s not a good look, especially after the PR successes of the Amazon Prime Video documentary, which endeared many neutrals to the club, the players, its fanbase, the city and the enigmatic Marcelo Bielsa in particular, to single out a female pundit and actively encourage fans and trolls alike to hound a person for doing their job. It is one thing for fans to independently debate a point made by a pundit. However, it is quite another to have the club’s owner officially take issue with what is, all things considered, an incredibly insignificant, throw away remark, by an analyst employed to have an opinion.

The club is either incredibly naïve to the fact Twitter is often a miasma of hate wherein many fans need little encouragement to be abusive; unaware that Premier League club’s online behaviour is magnified tenfold; and/ or the egos amongst Leeds United staff/ media team are so fragile that they are unable to respond to criticism from a female pundit in the same way they have responded to much criticism this year from male pundits (which is not at all, of course).

“What this incident captures perfectly is a broader trend across many official football club social media accounts, concerning the tone and style of official communications, which seek to reflect the (hyper-masculine) partisanship of dominant fan cultures.“

Digital media managers – most of whom are stumbling around this new profession with no institutional nor governing steer other than the culture of a particular club and ‘audience engagement figures’ – are learning ‘on the job’ and, a notable number of accounts, are taking their journalistic lead from the gutter press, hyperbole of tabloids and faux ‘authenticity’ of social media influencers. The examples set by responsible, morally-grounded journalism or the kind of copy in match-day programmes or official websites might however be better examples to follow.

What this incident captures perfectly is a broader trend across many official football club social media accounts, concerning the tone and style of official communications, which seek to reflect the (hyper-masculine) partisanship of dominant fan cultures. Thus, many tweets from these account are driven by the kind of (often combative, reactionary, smug) ‘banter’ and click-bait that allow media departments to report to directors increased engagement analytics and an upturn in ‘time spent on site’ indicators. Attempting to ape this kind of fandom back at fans is not only ill-advised, it is exclusionary, irresponsible and at times, like Leeds’ attack on Carney, nasty and crass.

This kind of ‘no publicity is bad publicity’ approach to digital content generation is likely the product of (poorly paid) marketing graduates taking up these posts, rather than those with a better grasp of journalistic codes of conduct and a broader sense of moral duty. It is also undoubtedly a reflection of these kind of roles being dominated by men with a very particular belief about what an ‘authentic’ performance of football fandom is. If the situation remains the same this will inevitably lead to more serious PR faux pas occurring in the future, football clubs actively (or otherwise) inciting mob-like hate online and, in turn, ostracising audiences they have worked hard to build.

“Digital media managers … are taking their journalistic lead from the gutter press, hyperbole of tabloids and faux ‘authenticity’ of social media influencers …“

There seems to be very little recognition currently that official club social media accounts should have a much stronger obligation to act in a socially responsible manner, especially given digital media is the nominal way fans engage with each other, their club and the game nowadays. Most fans need very little encouragement to operate in ‘us-them’ dualisms or be blinded to the realities of a situation because of a ‘love of club’. The last thing we need is another mechanism in football which makes this worse.

What makes the laddish stylistics of these accounts yet further perplexing is that the ‘brand’ of many clubs is now built upon a (public) liberalism, which stands against racism, sexism, promotes positive mental and physical health, etcetera. This implies the compulsions of corporate social responsibility are indeed well understood. Yet again though the digital realm seems to operate with a sense of quasi-isolationism at its core, unaware or unwilling to concede that the social rules of the material world, old media and other forms of media communication should relate to the digital one, too, if not even more so.

What we are in desperate need of is a critical mass of journalists, marketing managers, academics, corporate leaders, governing bodies and fan groups to organise around a code of ethics that acts in the spirit of the game, to share best practice, establish a knowledge-transfer network that is community-focused and agrees on a objective regulatory framework as the moral standard for all clubs to coalesce around.

Follow @digiFootballnet to follow the conversation and get involved and feel free to leave your comments below.